One day, even though the sun was shining over Moominvalley, Moomin was feeling very unhappy & wished himself away from it all. Unfortunately the Hobgoblin's magic hat heard him & zapped him to the top of a cold mountain. Now all Moomin wants to do is get home again.

Get Moomin home and solve a few puzzles along the way in this short 3D retro style Bitsy narrative game.

Hint: If you get stuck press an arrow key. ;)

Puzzles are series/pattern based with clues at the bottom of the screen.

This is a Moomin fan game (based on Tove Jansson's original characters), which touches on isolation and sadness. It's also cheese-soaked & has a happy ending.

Music by me (listen to it on Soundcloud).

As someone who loves Moomin and Bitsy, this was such a joy to stumble into! I loved the mood you created through your interpretation of Moomin aesthetics and your music. The puzzles were very engaging and fun, although I did get tricked a few times when the puzzle swapped between "repeat after me" and "What comes next in the pattern?" styles. I wish that I didn't get booted back all the way to the start when I failed, but even then it was super enjoyable and engaging. Thank you for sharing! I'm so glad I could play this and feel for a bit like I was part of Moominvalley.

I'm pleased you enjoyed it. Thanks for the much appreciated comments and helpful feedback. :) I realise now that sending people back to the beginning is a bit frustrating - it's a hangover of games I used to play in the 1980s. Although I should have learnt from my own frustrations that it's not the best way to treat a player.

This is really nice! Some of the puzzles reminded me of zoombinis. Really nice art. good moomin sprite

Thanks. :) I don't know zoombinis. I'll have to check it out.

Thanks for the feedback.

Loving this game. It's incredibly frustrating.

Thanks. Which particular parts do you find frustrating. I'd like to improve it.

Seems like many of the rooms are purposefully impossible to deduce how to beat on the first try, as the answer is essentially luck-based.

On one hand it adds to the surreal feel of the game where logic is thrown out the window. On the other hand it makes the game frustrating when you have to play the same rooms over and over again just because you were unlucky on one of the later rooms.

The aesthetic, environment, theme, and mood of this game are on point.

I'm curious what engine you used? It's a really unique and interesting look.

That's useful to know - thank you. The game is a mix of rooms, where some have no puzzles in the room, and the key point of those rooms is to develop the story. For the other rooms, the puzzles are all pattern/sequence based, with the clue for the pattern sequence shown at the bottom of the screen (reading left to right). So for example, the first cloud section that you need to cross (after coming out of the cave), the colours of the clouds you need to stand on are shown at the bottom of the screen. It's the same for the next room as well, and with all of the other puzzles - all pattern based. With the Hattifatteners room, that didn't work as well, as it was was just an avoidance puzzle, and I now think it's difficult to gauge distance from the 3D angle I chose.

Cute game. Sometimes, you gotta lose something before you realize it was important.

Just finished playing through it, this was ABSOLUTELY Lovely.  The music was a great addition adding to the adventure, and I thought all of the rooms looked stunning!

Thanks Tyedye - I'm so glad it hit the mark, and that you enjoyed playing it. :)

adorable! reminds me of Granny's Garden with the colour palette and the "I will send you home at once!" kinda bits :P

Thanks. I'm glad you liked it. :) I don't know Granny's Garden. I'll have to check it out.

I've just had a look at Granny's Garden - yes, I can definitely see why it reminds you of it. :) 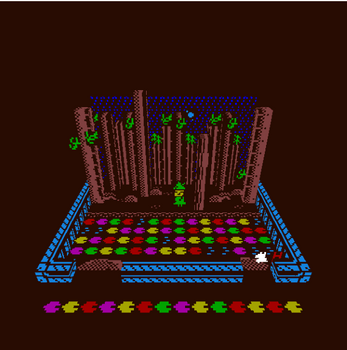 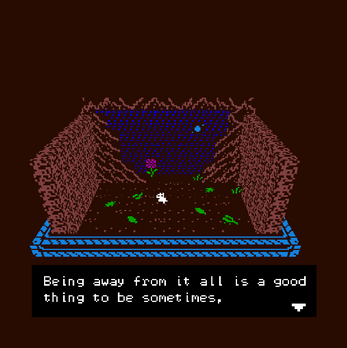 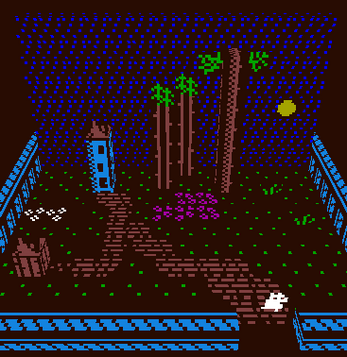 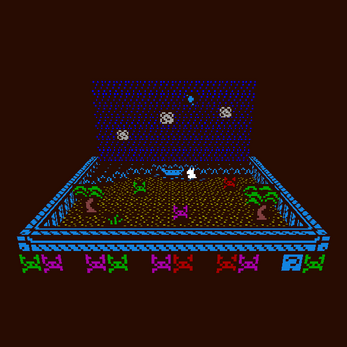 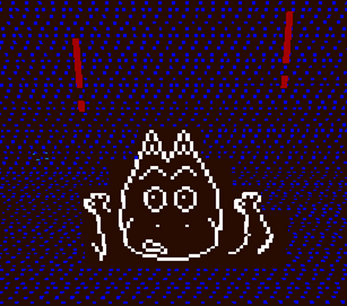