What I was trying to do

Ship Shape Billie (A Broken Pirate's story on the side) » Devlog
2 years ago by AshG (@ggnewed)
Share this post: 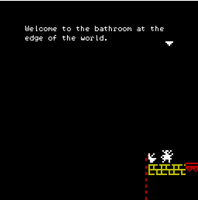 The aim behind this game was to add a side-story to The Broken Pirate's Cursed Heart game. I created the original BPCH game for Rainbow Jam 2017 , which is focused on LGBTQ++ themes. I'm aiming to update BPCH at some time to build on ideas I've either used or am planning to use in other side-stories.

A few things I wanted to do in this game:

Try & create a nod/hat tip in Bitsy to one of my favourite ZX Spectrum platformer games, Jet Set Willy

I've got things in there like conveyor belts, levers, ropes, stairs, collecting grog bottles, moving enemies, and an unhappy Maria. Because Bitsy has its constraints it was never going to be the same as Jet Set Willy, but it made me think about how I could implement various ideas. For example... stairs; conveyor belts that only allow you to travel one way; levers that change the levels of floors so you navigate a room; enemies move via swapping similar looking rooms that are triggered by invisible exits. In this last case I found out that you could make it quite tricky just by using 3 rooms for each enemy. I also wanted to try & make this without using any hacks that you can't do directly in the game data. I find it easier to work with these constraints - it gives me a better focus, and makes me think about what I'm doing.

Give it an LGBTQ++ narrative

I wanted to add in little touches that would give you a hazy bit of background to Billie - there's questions about identity going on there. I didn't want it to upset the flow of the game, so included only a few scenes with short text. Just enough for players to get a sense of where Billie is at.

I also added in some silly asides throughout the game through the use of invisible items and notice boards.

It's one of the few game I've made that has ended up more or less like I'd planned. It has a start screen/menu & 3 proper endings. The endings were only possible by using Ruin's Image to Bitsy converter

, which is such a handy tool. The end game images were converted from British Library Flickr images. One thing I'd really like to do is create a mockup cassette cover for it similar to the orginial Jet Set Willy style.

Ship Shape Billie (A Broken Pirate's story on the side)